This Month in New York! 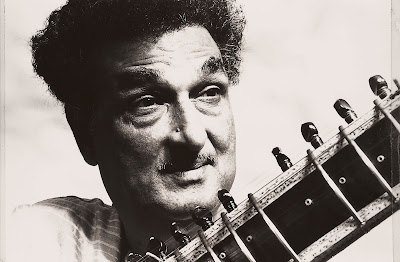 The last time I saw Ustad Abdul Halim Jaffer Khan was May 2016 at his home, amidst a formidable chess match with this 6-year-old grandson, Khaleel. This time, I noticed how frail Guruji had become, but his mind: the recollections, the quoting from Shaw, the Vedas and Sufi texts, were all pristine. The precocious little tyke was mercilessly beating his legend of a grandfather at the game as the rest of us stood in silence, unable to take our eyes off the chessboard. But Guruji always had that magical relationship with children, and was perhaps playing his part perfectly. We’ll never know the truth about who really won that game.

It was in that pure bond of faith that I was initiated as a disciple at age 9 when this iconic sitarist became our neighbor in a new apartment complex in Mumbai’s suburb of Bandra. Khansahab’s charisma radiating, wild hair emanating his mythic eccentricity, he challenged me to pick up the instrument and play that very first day I nervously interrupted one of his riyaaz sessions with his son Zunain. Many tributes have poured in since Guruji passed away on Wednesday, January 4th 2017, by disciples who have rightly recognized him as a gifted teacher. He gave you the permission to feel unique in your relationship to the sound, reiterating the idea that with the right technique and riyaaz anyone could overcome the universal challenges of the ability to play. But it was your attitude toward the repertoire that was crucial in developing agency as an artist. There could be no hesitation, a total surrender to the craft was essential. He demanded total confidence, even in my momentary failures, which were many, “Just don’t stop… transition, and make your way through the mistakes.” As we prepared for my recitals, he offered many ways to keep the routine fresh through the daily 6-hour rehearsals leading to the competitions. I brought home the medals every year I competed, but with a sense of having vanquished my own fears, I didn’t stop, Guruji! 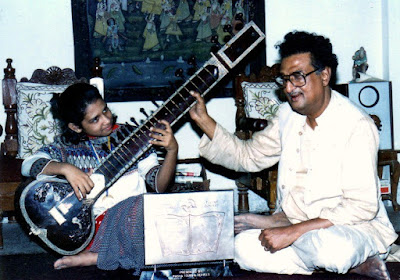 It was Guruji too who led me on an unexpected path towards jazz, not in the least due to his collaboration with Dave Brubeck in 1958. Defying an oxymoron as it were, as an avant-garde Hindustani musician, Ustad Abdul Halim Jaffer Khan was a master improviser, borrowing from both Indian and Western music traditions with chordal metaphors explored in his sitar quintet. His sheer brilliance in improvisational technique has escaped even the most seasoned Indian classical musicians. A few provincialist gate-keepers of “tradition” have even analogized listening to his work as, “eating pizza…you may want to indulge occasionally, but not every day.” I paraphrase, of course.

To a culture that prides on preserving tradition, Khansahab’s contribution in the rendering of ragas such as Pahadi, Pilu, Kirwani is sublime. As an innovator of style, he has created new possibilities for sitar playing by subverting a servile adherence to the Gharana system. Never the reckless non-conformist, he won the hearts of lay audiences throughout India with his compositions and performances immortalized by classic Hindi cinema; Khansahab’s inimitable style displayed in Mughal-e-azam, Jhanak Jhanak Payal Baje, Goonj Uthi Shehnai, and more. For fans of the Jafferkhani Baaj, within a span of a phrase he could at once evoke cries of wonderment as he illuminated well-worn ragas such as Tilak Kamod or Zila Kafi, and rescue the listener back into the melodic line. Ustad Amjad Ali Khan and Pandit Shiv Kumar Sharma, maestros of their own traditions, recognized and applauded the transformation Ustad Abdul Halim Jaffer Khan was bringing to a centuries-old art form. 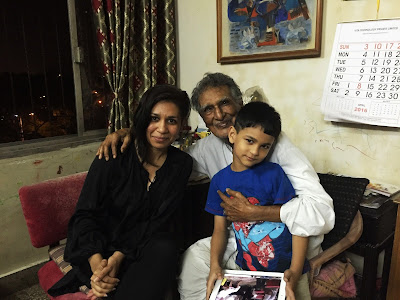 It is his audacious improvisational phrases, the unexpected approaches to transitions, and an artistry for rhythm (it was Guriji also, who would keep theka on the tabla while we practiced) that have been for me the bridge between two formidable music traditions – the Jafferkhani Baaj in Sitar and America’s most sublime gift to the world - jazz music. Steeped in an avant-garde tradition themselves, these amazing jazz musicians who encounter Ustad Abdul Halim Jaffer Khan’s music for the very first time, consistently declare with humble assurance, “I get it.” Dave Brubeck famously remarked that working with the sitar icon led the jazz master himself to play in a different way.

To those who want an equivalent of gastronomic comfort in the work of a genius, I say refer back to the Natyashastra, and if in Khansahab’s legacy you do not find a true manifestation of the theory of Rasa, ask yourselves, what is the function of art? If the brilliance surpasses you the first time, listen again. So, it occurred to me as the great bassist, jazz philanthropist and educator Christian McBride accepted his Visionary Award at the Jazz Connect conference this afternoon stating, “Respect the elders, respect the tradition, find something new,” that this was exactly what Guruji’s spirit embodied. His transformative goal for us was to play as if the materiality of the sitar had ceased to exist. I could never reach that goal, but I know someone who has come quite close. Zunain Khan, brilliant sitarist and Guruji’s son and protégé carries forth the tradition of the Jafferkhani Baaj – Ustad Abdul Halim Jaffer Khan’s sublime gift to the world. – www.jafferkhanibaaj.com

Musician of the Month!

Welcome to all Music Lovers!

From past to present... The HarmoNYom's Blog is a vibrant conversation about multi-dimensional South Asia, a place where you can find everything about Indian Classical Music, musicians, list of concerts in New York and latest news all over the globe. Please feel free to share it without moderation with friends, family members and fans! http://harmonyom.blogspot.com/